Price Ladders: How Much Revenue Are They Losing You?

Remember when "New Coke" came out?

(If not, you’re still young, and I’m not jealous of your metabolism at all :)

New Coke sounded like a good idea at the time. But this too-sweet Pepsi knock-off has gone down in history as one of Coca-Cola’s biggest money-torching blunders.

Well, get excited, because revenue management has its very own New Coke: price ladders!

(If you have to ask what a price ladder is, it obviously hasn’t gotten its razor-sharp hooks into you yet – very good! Now run for the hills while your STR rank still looks good. Better yet, schedule a demo of our innovative new RMS: N2Pricing).

Why is it a terrible, horrible, no good, very bad idea that the hoteliers should avoid like their careers depend on it?

Price laddering is a surefire way to lose revenue (emphasize: not a great buy for revenue management leaders)!

Here’s how price laddering sabotages you…

The key feature of price laddering is:

In the price laddering example below, Hotel Beta waits until it reaches 50% occupancy, then increases price from $45 to $50.

Then, Hotel Beta waits until occupancy reaches the next threshold (60%) before increasing price a little bit again – from $50 to $55.

And so on. Until Hotel Beta ends up with 90% occupancy, charging $70 BAR on the last five rooms to book.

And this price laddering strategy nets Hotel Beta: $4,900 in revenue. 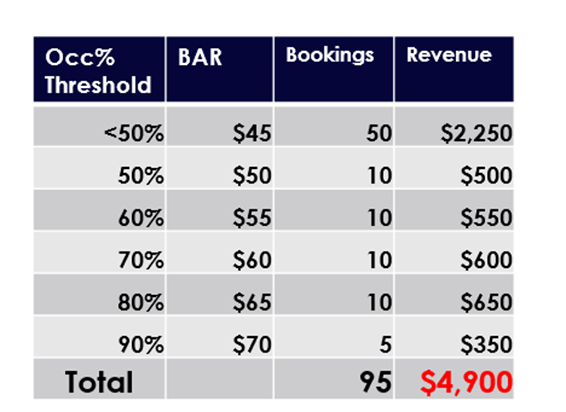 Price laddering is a simple construct that’s easy to understand. And, supply and demand principles are clearly at work (as rooms become more scarce, their price increases), which is great.

So what’s not to love?

For the answer to that question, let’s turn to another example, in which Hotel Beta’s biggest competitor – Hotel Alpha – is using a ‘predictive pricing’ approach instead of price laddering.

The key feature of predictive pricing is:

In this example, Hotel Alpha accurately forecasts in advance that they will reach 90% occupancy. Based on that prediction, they start charging $70 BAR (the max BAR Hotel Beta reached) on the very first room rather than wait until there were only 5 rooms left.

Hotel Alpha ended up achieving 90% occupancy, just as Hotel Beta did. No difference there.

Hotel Alpha made more because they didn’t wait to see what occupancy materialized before they set the right price. Using prediction, they applied the correct price from the beginning, which netted them more revenue on the first 80% of all bookings.

And this is only from the power of a forecast. Just think what could be achieved with a true RMS – like N2Pricing – which also factors in critical data from the competitive landscape and customer price sensitivity!

Hotel Beta made 36% less revenue than their competitor–Hotel Alpha—by relying on a price laddering scheme.

That kind of loss is sure to leave a bad taste in the mouths of owners at Hotel Beta – like New Coke did.

Schedule an N2Pricing demo today to see how much revenue you’re losing and how much you stand to gain.

Tess McGoldrick is a Vice President at Revenue Analytics. In this role, she leads cross-functional project teams to develop high-impact products that provide organic revenue growth for her clients.


Tess McGoldrick is a Vice President at Revenue Analytics. In this role, she leads cross-functional project teams to develop high-impact products that provide organic revenue growth for her clients.

Cartoon
Cartoon: GMs hate RMSs
A look at the interrelated issues pitting GMs against RMSs, resulting in an abundance of overrides.

Video
What’s Wrong with RMSs Today?
Revenue management has changed, but has the technology kept up? Watch this video to learn more.

Guide
[HSMAI] Rethinking the RMS for the Travel Recovery and Beyond
Revenue leaders are reevaluating their needs and their RMS options. In this new HSMAI guide, dozens dish on “why now,” bust myths, and share what to look ...

Guide
What’s More Lovable – N2Pricing™ or a Puppy?
Some people love dogs. And some people are more, well, RMS people. Which are you? Find out here.

Have you tried N2Pricing yet?

Don’t settle for the status quo. See N2Pricing for yourself. Get a full product tour so you feel confident in your choice of RMS come contract time.